Why did Rahul sport a beard during UP elections?

Why did Rahul sport a beard during UP elections? 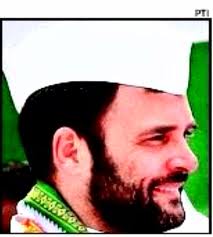 There is no denying the fact that Congress general secretary Rahul Gandhi put in his very best campaigning for his party during UP elections. For the last over two years his main target throughout remained this largest State of the country.
During electioneering he experimented with many innovative skills to appeal to the voters. He stayed in dalit homes. He violated the 144 in Bhatta-Parsaul to sneak into the area in the wee hours of the morning on a motor-cycle to exhibit his solidarity with the sufferers of the police atrocities on the agitating farmers.
But what struck the eye the most was his sporting a beard throughout the election campaign. On completion of the hectic campaign the moment he returned to Delhi, he was seen a clean shaven young man handsome and bright as ever. What could be the reason?
It is true that Rahul spent many sleepless nights campaigning in UP. He had staked his political career with the outcome of the results. Maybe, he had no time to spare for shaving. But there were other leaders too within Congress and opposing it who were equally involved yet they could find time to get a shave.
There are also leaders who vow not to have a haircut or a shave till the campaign was over. This can be on the advice on a soothsayer or astrologer.
Another reason could be that with a beard he could strike a better and greater affinity with the Muslim voters — a community to appeal to which for votes the Congress had done all it could.
But the reality will continue to be evasive as ever.
Posted by Shaktistambh at 8:30 AM

Labels: Why did Rahul sport a beard during UP elections?