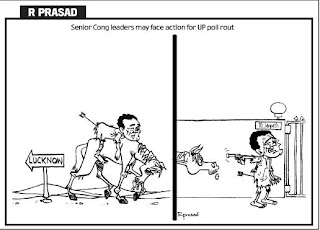 Courtesy: MAIL TODAY
Since the day results of UP assembly elections were out on March 6, 2012 everybody was groping in the dark as to who was responsible for the Congress debacle although Congress general secretary Rahul Gandhi, Congress President Mrs. Sonia Gandhi and daughter  Priyanka Gandhi Vadra did their best to recapture the Congress fort lost to various opposition parties 22 years back. Both Mrs. Gandhi and Rahul Gandhi were bold to accept the verdict but declined to own responsibility.
Last week, Rahul Gandhi had a two-day brainstorming session with all the party candidates successful and defeated as well as the State and national leaders, including Union ministers. Nobody was sure as to who was responsible. There is no word out that even the candidates who have won have attributed their success to the mother-son duo. All we heard was that the party had so far seen Rahul's soft nature and they were now in for shack to come face to face with a hard task master. He even threatened that strict action will be taken against those responsible.
But the MAIL TODAY  cartoon by R. Prasad today has cleared all clouds of doubt. He has clearly indicated who is responsible. Our thanks to the cartoonist. I think the skin of most of the leaders will now be saved.
Posted by Shaktistambh at 1:53 AM