Interview MODI'S VISION AND PERFORMANCE HAS CAUGHT IMAGINATION OF THE YOUTH: MURLIDHAR RAO

Interview
MODI'S VISION AND PERFORMANCE HAS CAUGHT IMAGINATION OF THE YOUTH: MURLIDHAR RAO 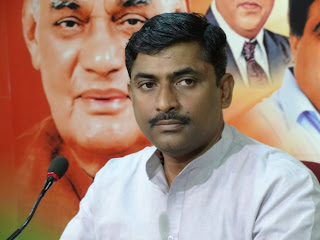 BJP National General Secretary Murlidhar Rao was born in a farmer's family in Andhra. A product of the Osmania University Hyderabad from where he did his M.Phil (Political Psychology), he was also elected General Secretary of University Students Union there. He joined  BJP only in 2009 where had a meteroric rise. Initially attached to the National President Shri Rajnath Singh, in 2010 he was made a national secretary in-charge of Tamilnadu and Kerala. In 2013 he was elevated as national general secretary. He got his initiation into the RSS at a very young age and later joined the Akhil Bharatiya Vidyarthi Parishad. Led by  late Shri Dattopant Thengadi he was one of those instrumental in the formation of Swadeshi Jagran Manch and became its All-India Organising Secretary. He did a lot in taking up the causes of kisan panchayats, beedi workers, farmers, fishermen, beedi mazdoors and weavers in different States of the country.  Amba Charan Vashishth interviewed Shri Rao at his residence in Delhi last week. Excerpts:

Now that BJP has finally made its choice for Prime Minister in Shri Narender Modi, how do you visualize the latest political scenario in the country?
Doubts, if any, in the mind of anyone outside BJP about the mass appeal of Shri Narendra Modi throughout the nation are fast evaporating, particularly after unprecedented success of his visits to different parts of the country. His anointment as BJP’s PM candidate has geared up the cadres, rejuvenated our sympathisers and also converted undecided voters into our supporters.
The country as a whole wants this most, corrupt, inefficient and shameless UPA government to go. BJP under the leadership of Shri Narendra Modi will prove to be the game changer. People clearly seem to have made that choice open. This is because the people have seen the performance based track record of Gujarat under Shri Narendra Modi’s leadership.

You come from Andhra Pradesh. Do you think it will have an impact in your State too?
Certainly. The response of AP is also in tune with that of the rest of the country. Congress has messed up in AP. The people feel let down on every front. This impression emerged from the success of the Hyderabad youth rally of Shri  Narendra Modi. The people of Andhra are clear about the opportunistic and flip-flop policy of Congress on Telangana. They have messed up the issue for political gains risking lives of thousands and putting two sides into a conflict. Local leadership of the Congress is a divided house fighting each other. BJP is surely going to gain in the state because of negative sentiment against Congress and a positive feeling for performance of various BJP ruled states and more particularly Gujarat under Shri Narendra Modi’s leadership.

About four years back Home Minister P. Chidambaram announced UPA's decision to carve out a new State of Telangana, but later resiled. This time it was the AICC which took a decision on Telengana. But for the last over two months nothing seems to have moved in the UPA. What is your assessment of the situation?
Congress has bungled on the issue of Telangana. It is the result of their insincerity and dishonesty to the cause. Congress has not done proper homework and preparation before announcing the bifurcation decision. They are trying to appease people without actually delivering on their promises. With every passing day it is becoming clear that Congress is cheating the people of both the regions of Telangana and Seemandhra. They will have to pay a heavy price for the same.

You represent the youth in the Party. Will Shri Modi's anointment have an impact on the young voters?
India is a young nation or the nation of the Youth. The young generation has become very conscious of their rights and is assertively articulating their aspirations. With the level of exposure and information available, the youth are capable of making comparisons . Shri Narendra Modi has caught the imagination of the youth with his vision and proven performance not only in Gujarat but all over the country by ably and openly talking about his idea of Future India. He has focused on transforming governance to achieve the set national goals – particularly those related to development - in time bound manner.  The youth of the country are now impatient for change and increasingly finding themselves nearer to BJP under Shri Narendra Modi’s leadership than ever before.

BJP's opponents had been making a fun of the NDA's hope to form a government at the Centre in 2014 in view of the fact that BJP has almost zero representation in 200 odd Parliamentary seats in the South, West Bengal and North-Eastern States. What would you say?
As I said earlier also, the people across the country are fed up with the corrupt and inefficient UPA rule. The states you are mentioning are no different. In this situation I see substantial gains for BJP in these areas also. More important is the fact that public opinion against Congress is building up day by day in every part of the country and BJP-led NDA is emerging as the only alternative. Therefore political formations involving the non-Congress parties and BJP are very much visible.

As part of its efforts to check the fiscal deficit, UPA government has put a ban on fresh appointments and announced other measures. How do you feel about these?
UPA has not been able to deal with the problems faced by the economy in an innovative way. They are unable to think of any idea to take the country out of the situation they have pushed it into. To reduce deficits, steps like cutting down avoidable imports like telecom and power equipments, edible oils etc. and pushing domestic manufacturing so as to escalate exports etc. should have been initiated on an immediate basis. The government prefers to bring foreign investment instead of all such measures. But just by removing the caps on foreign investment, foreign players are going to trust more a non-performing government and invest in a significant way.

Can you explain the reasons for a poor showing of BJP at the hustings in the South?
In Karnataka during the recent assembly elections we could not do the needed political consolidation based on the good governance of our government. But we are now back to expanding our base and this time we will surely convert the growing enthusiasm and support for BJP into winning seats. The people of Karnataka will soon realize the need of bringing back BJP to power in the state. In Tamil Nadu, the response to Shri L K Advani ji’s  yatra to raise the issue of black money was huge. Also the recent killings of BJP leaders by Jihadi forces have also generated sympathy towards BJP and people are rallying around the idea of a non-Congress government at the centre. The Narendra Modi factor will also benefit BJP significantly. Surveys also demonstrate that there is an enormous response in favour of BJP. In Andhra Pradesh, people are fed up with the state Congress government and will respond very strongly against the flip-flop, opportunistic  policy of UPA government on Telangana. Realignment of political forces seems imminent.

You have been a leading light of the Swadeshi movement for pretty long. How far do you think the NDA's economic policies will be singed with the thinking of your movement?
BJP is an ideology based party committed to self-reliance.  By and large, it has believed and tried to follow the Swadeshi Model of economics. Even during NDA regime we saw it in Doha when Murasoli Maran took a strong stand. I am pretty confident that in future also the ideals of self-reliance will dominate economic thinking of BJP & NDA.

Can you enlighten what steps BJP is going to take to make those sections and areas of the people to vote for you in the next election which had not done earlier?
We are taking a lot of steps to remain in constant touch with all sections of the people and align ourselves with their hopes and aspirations. We have very actively conducted our campaigns to represent the genuine aspirations and needs of the people like women, youth, SC, ST, weavers, fishermen and minorities. We will be focusing through various campaigns on the first time voters. We are working hard to make the different sections of people to understand that BJP is the only party to espouse their feelings and address their concerns.

Would you like to comment on what happened in Muzaffarnagar in UP recently?
Muzzafarnagar riots are yet another example of use of divisive politics for narrow political ends. It is a complete failure of the Samajvadi Party government of Akhilesh Yadav. Congress led UPA at the Centre following the agenda of vote bank politics has not given importance to addressing the riots and instead targeted BJP leaders for narrow political gains. Even during the recent incidents on our border inflicted by Pakistan, Congress preferred to target BJP which is their political adversary instead of the national adversary.