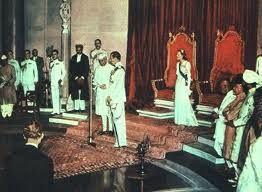 As zero hour struck at midnight on August 15, 1947 ’s first Prime Minister Pandit Jawaharlal Nehru in that hour of pride and pleasure made a memorable and momentous speech “Tryst with Destiny” in the Constituent Assembly. His address made history. It was a great speech, a great prose and an example of excellent oratory.

Reading it once again after a lapse of 65 years is both exhilarating and exciting. In the present perspective, many interpretations and omissions strike the mind.

The first to surface remains Pandit Nehru's failure to mention, even obliquely and indirectly, the partition of the country and the birth of Pakistan that had become an actuality twenty-four hours before. A holocaust in different parts of the country and in areas which had become that day had already set in. It will be too much to say that the feelings of joy over hard won freedom overwhelmed the pain and misery of the crores of his countrymen. It could only be otherwise. Our joy of having won freedom had actually been pierced with the pain of holocaust, murder and transfer of population – people marching towards unknown destinations, penniless and robbed of their belongings and brethren. He seemed, deliberately of course, trying to overlook a harsh reality and to suppress his own emotions of pain from brewing to the brim -- the feelings that must have inundated his heart then. One of the reasons for omission could have been his sense of remorse for having failed to prevent the balkanisation of and, in particular, to honour Mahatma Gandhi's solemn pledge: "I won’t allow the partition of the country. The country would be partitioned only over my dead body." 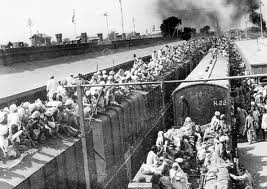 Nehru’s agony did find expression when he said: “Before the birth of freedom we have endured all the pains of labour and our hearts are heavy with the memory of this sorrow. Some of those pains continue even now.”  He seemed never to live in the reality of the present; he was extravagantly optimistic about his dreams for the future   “Nevertheless”, he adds, “the past is over and it is the future that beckons to us now”. The later events brought out the fact that he always looked up to future overlooking the truth of the present. He appeared never to have done his homework to anticipate and predict the future; he just dreamed of it.  He ignored the present of stark reality whether it was the invasion by in Kashmir or the threat from . He never made the present strong enough to secure the future with own strength and confidence.  problem continues to haunt and torment us even today. has lost more innocent men, women, children and security forces to the dragon of terrorism in Kashmir and elsewhere than she did during the three wars with and one with .
He was speaking as a great visionary, but his apparition went awry. He failed to anticipate the tragedy that lay ahead for crores of his countrymen – crores who lost their life and crores who had to leave their homes and hearths for an uncertain future in the aftermath of freedom and partition of the country they loved. The then lakhpatis stood reduced to penury, some even having been forced to beg.

His speech was surely a good prose, articulately drafted and crafted; yet it was not a fact that “At the stroke of midnight hour, when the world sleeps, India will awake to life and freedom”.  In fact, in many parts of the world at that moment, it was day light and not the dark of night “when the world sleeps”.

India may have been slave and helpless for centuries, but she never was dead or in slumber to "awake to life".  While did wake up to freedom at that moment, she certainly did not “awake to life” because was never dead or extinct even under foreign domination. Nations can be enslaven even for long, for centuries but they never die

The most striking at that hour of great triumph and victory was the omission by Pandit Nehru to mention the name of the Father of the Nation, Mahatma Gandhi whom he and we credit with having won us freedom through non-violent means without a drop of blood being shed. The omission certainly looked a deliberate act. Was it an apprehension in his heart that taking his name may hurt the sentiments of a section of the people inflicted with the wounds of partition? With this conscious or unconscious act of not mentioning his name, he deprived the messiah of freedom and non-violence the credit which rightly belonged to him and him alone and to no one else in this hour of achievement and glory to the nation. 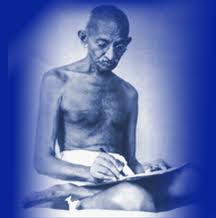 He was certainly referring to Mahatma Gandhi without mentioning him by name, when he referred to the “ambition of the greatest man of our generation …. to wipe every tear from every eye”. But why did he refrain from mentioning him by name, particularly when it was the right moment to do so? Strange, we regard him as the Father of the Nation, but feel shy of taking his name when the nation is unchained out of the bonds of slavery because of his leadership and guidance.

Pandit Nehru seemed to be alive to the fact that people will blame him for the partition.  And that is, perhaps, why he says that this is “no time for petty and destructive criticism, no time for ill-will or blaming others”.